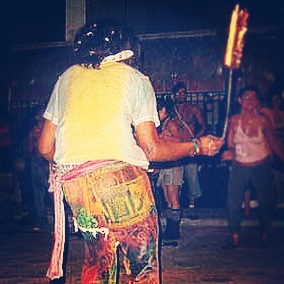 on the belief in travel.

So I will be compiling random lists of tens. I guess until I run out of ideas. Each list will be about a specific topic. None of the lists will be extensive, but merely reflect the mood I am in. All of the lists will be presented in no particular order, but probably more or less the order in which I thought about them.

If anything these lists are meant to help me keep mental inventory of my interests.

I love the city, and am an urban brat. With that said, maybe it’s because of the neighborhoods I’ve grown up in, but graffiti has always intrigued me. The level of expression and the level of illegality make the art form attractive to all urban rebels, especially since many of its messages have yet to be deciphered.

I know it’s trendy as all hell, but for someone who grew up disliking jocks, yoga is a happy medium. The stretching is something that gets me going, and ready to head out into the city streets. The fact that I can practice yoga anywhere I have my mat is something, which ensures I maintain my yoga practice. Plus the meditation aspect of yoga is perfect to help shut off the city noise when so desired.

I’m personally a big fan of Rodney Yee, and watching his DVD’s really helped get my practice started which has now lasted over two years.

My initial interest began with Jim Morrison. Eventually, I read Carlos Castaneda books. In my travels through Mexico, I have at several times attempted to connect to my indigenous past through shamanism and my ancestors magical past.

Anyone with a little of consciousness can sense that something is very wrong with the world. You don’t have to be an economist or rocket scientist to have a feeling that we are heading in a very dangerous direction. Perhaps, now more that ever, we are in need of the Shaman. Our rock stars no longer fulfill that need, the way the Doors intended to do.

As someone that grew up on punk music, this is just a further extent of the culture into adulthood. I am glad that the DIY movement is extending outside of the music scene and into very pragmatic everyday things like generating one’s own electricity. The mainstream will never know where it’s at until it’s too late because the kids are all doing it for themselves.

This is a no brainer. The planet is on everyone’s minds, well at least those of us who believe in science. I’m really excited by the do-it-yourself aspect of a lot of environmental initiatives, especially those in the inner city and in “underdeveloped” countries.

Mexico is the country where my parents came from. In order to better understand who I am, I have had to learn about where they came from. This has helped me understand them better, but also myself. The country to the south is like a grandparent I hardly knew growing up, but with which I have become very familiar with as an adult. Mexico is for all intents and purposes still a post-revolutionary state.

Let me be clear, I am interested in an education of liberation, and not simply in a liberal education. Until that distinction is made clear, all conversation and dialogue will be futile.

Poetry is my passion, my friend, my retreat, and my weapon. Poetry fills a lot of spaces in my world. I first started writing regularly when I was 12, but I didn’t think of myself as a serious poet until I was 16. Still I wasn’t able to refer to myself as a poet until I came up with the moniker, po’ E.T. about 4-5 years ago.

Will post a post about my favorite ten poets later, or at least my ten favorite that day.

not just for hipsters anymore

I got into vinyl into seeing something on the history channel. They found these vases that had grooves on the outside, which they tried to play with a needle and a speaker. They explained about how if we were to lose access to all technology, we’d still be able to play vinyl as long one had a needle and something to use as a speaker. It made me think, “I better get some vinyl to ensure I got some tunes for the apocalypse.” 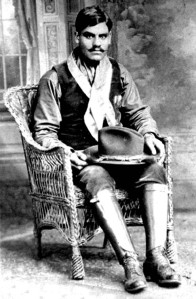 Nothing beats being able to process your own film and develop one’s own photos. I miss having access to a darkroom, but digital photography compensates for it, and requires much less space and no inhaling of chemicals.

Roberto Bolaño’s writing fascinates and enthralls me. His stories engulf me and wrap me with his themes and characters. He is currently my favorite author right now. Upcoming, I will write future posts for some of my other favorite authors.

Bolaño was a Chilean writer, who moved to Mexico City during 1968, where student protests and the government crackdown at UNAM left quite an impression on young Roberto. In 1973, he returned to Chile to participate in the country’s new socialist government. After only a few months since arriving, Allende was overthrown through a military coup led by Pinochet. Bolaño was arrested, accused of being a Mexican spy/terrorist, but is quickly let go, and returns to Mexico.

In 1977, he moved to Europe and continues his life of vagabond poet. He lived mostly in Spain. During his early forties, he turned to writing more fiction than poetry because he felt he needed to make money to support his son. In 2003, he passed away due to liver failure.

The life that Bolaño led or wants us to believe he led is clearly described in his writing. His novels revolve around criminals, corrupt governments, sadistic fascists, nationalists, exiles, ex-patriots, and drug addicts, but above all, in all of his novels are the poets. The poet’s excess and immersion into chaos in order to find his/her voice like Rimbaud or Morrison.

Bolaño is a lefty poet who saw himself as a detective/journalist/rock star. And if we can believe his novels, he lived like each. His novels often read like an autobiography, in particular Savage Detectives. Here Bolaño describes poets of Mexico City during the late 60’s up through the 70’s, and “real visceralismo”, a poetry movement in Mexico during the twenties.

But his novels are also filled with imagination, such as Nazi Literature in the Americas, where Bolaño creates an array of writers and poets from the Americas with a right wing if not complete fascist leaning. Each character described seems so believable and plausible which gets one thinking that perhaps each character is simply a reference to an actual author that did really exist. And if Roberto Bolaño has actually read any of these authors’ work? The book reads like a reference guide with short biographies, but each story completely destroys the common notion of the liberal poet/artist, but what about the conservative artists. After all, Hitler failed art school.

Roberto Bolaño is a Beat poet for Chileans, for Mexicans, for Latin Americans, for Spanish speakers, for orphans of the world with no country or movement of their own. His work continues to be published posthumously, which may or may not be a good thing, but Bolaño will continue to remind and inspire future writers and poets to continue to struggle while also reminding that artists cannot simply check their politics at the door if they truly want to break on through. All while avoiding being dogmatic and coming off as preachy. 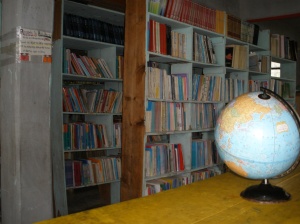 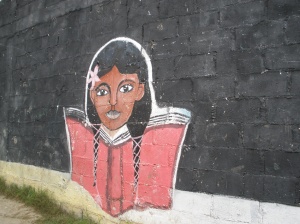 i was surprised there even was a library.  found it interesting that a library was seen as something important to have along with a computer center and basketball court at the zapatista school.